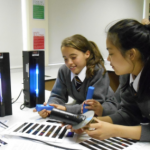 Astronomy GCSE is offered to pupils at the end of Year 8 on the completion of Key Stage 3. The course provides enrichment and challenge to More Able and Determined pupils with a keen interest in the subject.

The Astronomy course commences in Term 6 of Year 8 and is studied exclusively during Year 9 science curriculum time until the GCSE examination has been taken. This group then undertake accelerated learning of the science content of Year 9 in Term 6, with subsequent transfer to double or triple science in parallel to the remaining Year 9 cohort. 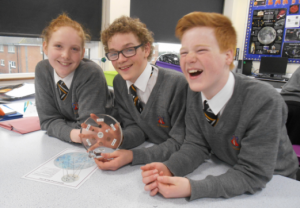 Astronomy GCSE incorporates visits to planetaria and observatories in addition to observing evenings and lectures.

GCSE Astronomy results are consistently 95% or greater grades A* – C.

After many months of eager anticipation and preparations from every department in the school, St Richard’s joined with pupils from 19 other schools and colleges to witness our historic live radio link with Tim Peake on board the International Space Station, at 15:56 on Monday, April 18th 2016.

After a brief introduction from Miss Cronin, the ceremonies commenced with a spine- 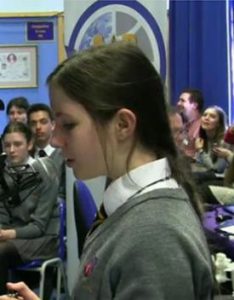 introduced the Principia Mission and welcomed the ARISS co-ordinator, Ciaran Morgan, who used a borrowed model of the ISS to explain the  relative  position  of  the  communication  module.  Having  explained  how  tricky  the contact could be, there was a tangible sense of anticipation as a Year 9 pupil commenced the call.

The Bexhill Observer reported that she, ‘initiated and ended the link expertly, using her recently-gained amateur radio licence, and was lost for words. I feel relieved, it was amazing but we were very lucky to be able to speak to Tim at all,’ she said. It took five goes by Lucy before Tim replied saying, ‘I hear you loud and clear’. BBC South East broadcast the event on Facebook Live in real time, while the ARISS website streamed the presentations in their entirety.