British Values and Our Catholic Ethos

The Government launched its Prevent Strategy in 2011 in an attempt to prevent extremism and religious radicalization of young people. All staff have received training on Prevent and understand their role in safeguarding pupils from all forms of extremism.

In the Prevent Strategy, the Government defined the fundamental British Values that all schools should promote. These include: democracy, rule of law, individual liberty, mutual respect and tolerance of those of different faiths and beliefs.

These values are nothing new to St Richard’s and have their origins in our Christian tradition and the life and teachings of Jesus Christ. As our Mission Statement states, “we are a community where all are welcomed in the spirit of Christian love and respect.”

As well as helping our pupils flourish academically, we recognise the importance of helping them to develop socially, morally and spiritually so that they are able to make a positive contribution to the world they live in.

At St Richard’s, we promote British Values by grounding them in our Christian vocation to be “disciples of Jesus” whose  no-preferential love, non-violence and inclusion of all, provide us with a powerful example of how we must resist violence and be promoters of peace and cohesion in our own communities.

Our Catholic Christian values of compassion, respect, stewardship and service recognise the inherent God-given dignity of every individual. It is on this basis that we celebrate individuality and diversity and promote a world based on equality and fairness so that the Common Good is served.

Within this context, Catholic values naturally align with the Government’s view of British Values expressed as ‘democracy, rule of law, individual liberty, mutual respect and tolerance of those of different faiths and beliefs.’

The examples below give a flavor of some of the ways in which we seek to embed British values at St Richard’s although this should not be seen as an exhaustive list. 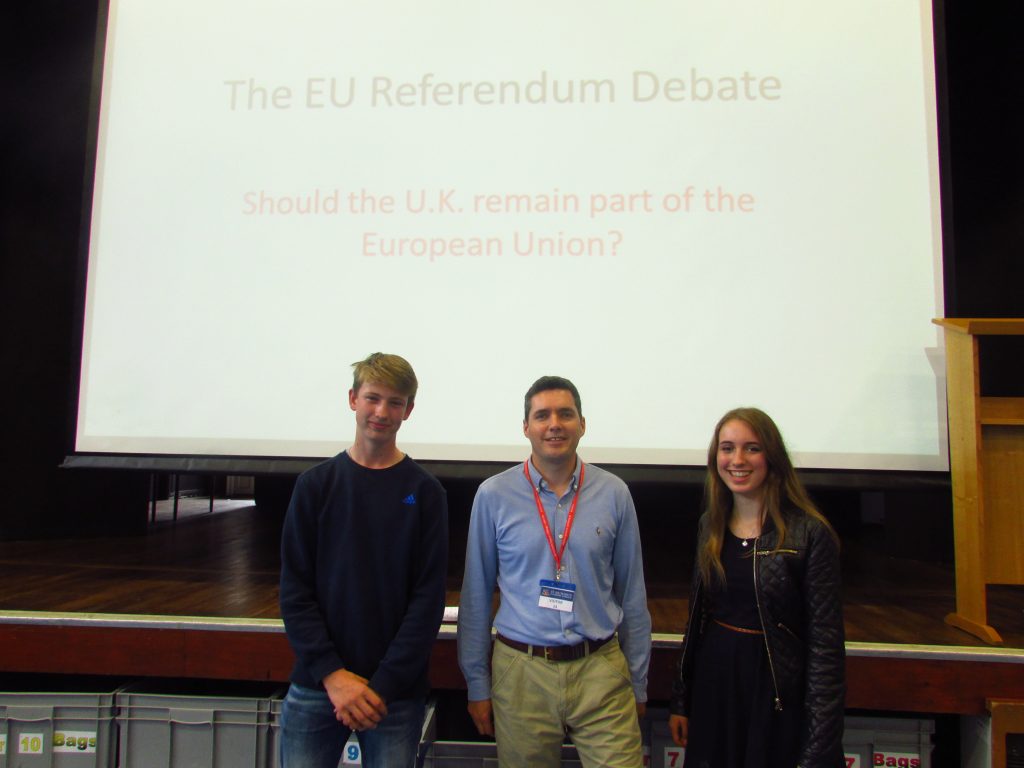 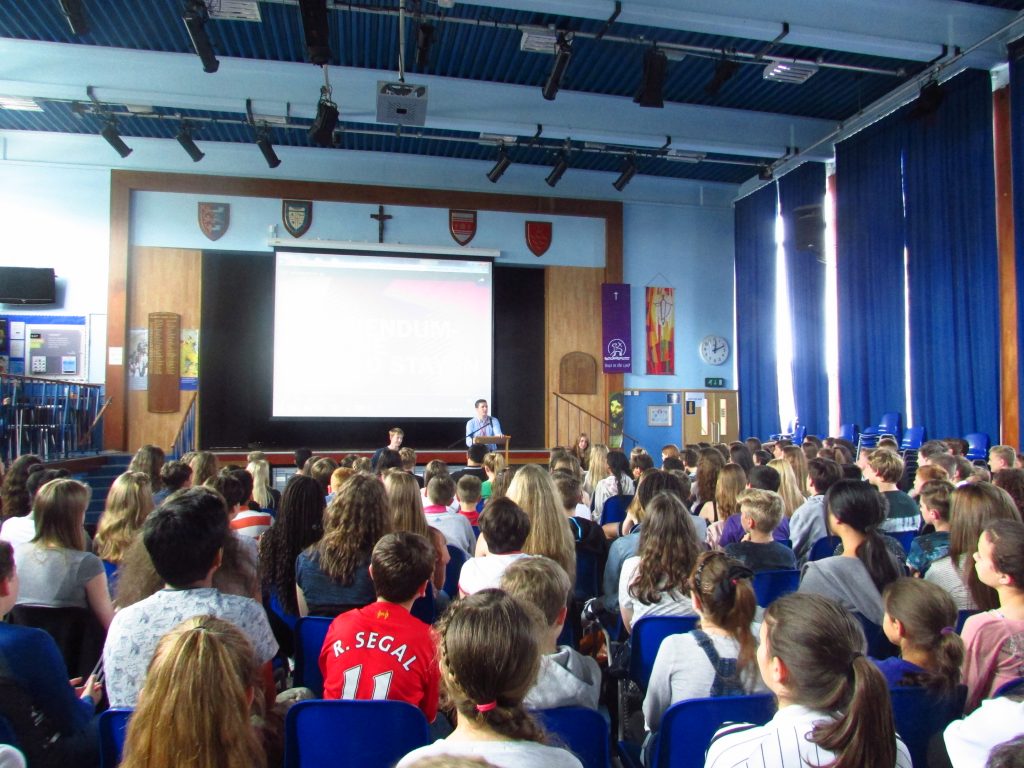 The importance of democracy is taught in several subjects including PSHEE, History and RE. Pupils learn why it is important to vote and learn about countries where this right is violated. Assemblies also develop these themes. Pupils take part in a number of elections including for: pupil leadership roles such as Form Captain and Head Boy/Girl; Youth Council and mock elections. To mark the EU Referendum in June 2016, local MP Huw Merriman, chaired a pupil-led debate between rival campaigns before all pupils cast their votes at the end of the day. Click here to see the campaign video link that Emilie-Jayne made.

The Rule of Law

The importance of laws/rules, whether they be those that govern the class, the school, or the country, are consistently reinforced throughout every day, as well as when dealing with behaviour and through assemblies. In PSHEE and RE, pupils are taught the importance of laws  and the link between law and justice. Visits from outside agencies including the Police and Fire Service are an integral part of our PSHEE programme. Through this, pupils learn the consequences, both personally and for society, when laws are broken.

At St Richard’s we encourage all pupils to make independent, safe and responsible choices. Pupils are encouraged to discern their vocation and develop their skills, interests and talents so they can be the very best they can be. Pupils have an element of choice and freedom in how they approach their learning especially through the use of projects and extended learning. Pupils are encouraged to know and exercise their rights and freedoms in a safe way. Learning in PSHEE and other curriculum areas has a strong focus on personal safety including e-safety, to ensure that pupils know how to react in different situations.

As soon as you walk into St Richard’s you are struck by a strong ethos of mutual respect between pupils and staff, something visitors regularly comment on. Relationships between pupils are excellent as are relationships between pupils and teachers. This is supported by a strong pastoral system and rewards and sanctions that promote respectful behaviour.  Bullying and other acts of disrespect or discrimination are dealt with immediately and are never tolerated. Our anti-bullying weeks have a specific St Richard’s focus and have targeted areas such as homophobia, disability awareness and appropriate use of language.

Tolerance of those of different faiths and beliefs. Central to our Catholic tradition is an acceptance and appreciation that we live in a culturally diverse society. This is something that must be celebrated and never used as a target  for discrimination. The Catechism of the Catholic Church clearly states that “every form of social or cultural discrimination in fundamental personal rights on the grounds of sex, race, colour, social conditions, language, or religion must be curbed and eradicated as incompatible with God’s design.”

Through RE, PSHEE and History lessons pupils learn about how the UK became a multi-faith and multi-ethnic society and the challenges and benefits this brings. Our own school is ethnically and culturally diverse, something that is seen as a strength as all groups are represented and valued at the college. In Year 9, pupils take part in a Community Cohesion Day in which they explore a number of issues surrounding diversity. We have strong links with other schools and have had our International School Status redesignated twice. Through a wide variety of international trips and visits to places of worship of other religions, our pupils develop a greater understanding and appreciation of the culturally and religiously diverse world they live in.

Following the rise of ISIS and 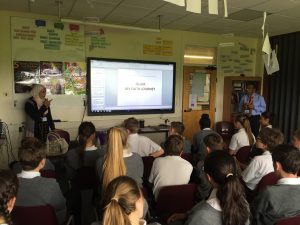 Islamist terror attacks, we have developed specialist lessons that expose their ideology of hate and emphasise how these groups contradict both Islamic and British values. This has been reinforced by the local Islamic Community who have given presentations and answered questions.

We are proud that Catholic schools promote values that are both Catholic and British, including: respect for the individual, democracy, individual liberty, respect, tolerance and inclusiveness. Our schools promote cohesion by serving more ethnically diverse and poorer communities. Catholic schools provide high standards of education which are popular with parents from all social, economic and faith backgrounds.” Paul Barber (Catholic Education Service, December 2014).