Posted at 10:53h in School News by mrskleink 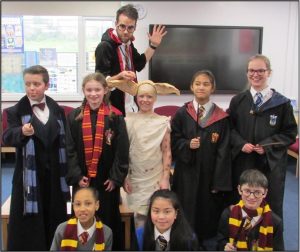 The inclement weather could not stop staff and pupils at St Richard’s Catholic College celebrating World Book Day – they just did it a week later!

On Friday, 9th March, enthusiastic staff and Year 7 pupils were invited to attend school dressed as their favourite book character. Many Harry Potters, Hermoine Grangers, Mad Hatters and Gangsta Grannies wandered the hallways, causing several double-takes throughout the day from older pupils! The school also collected hundreds of books to donate to Oxfam to support them to continue their hard work in developing countries.

Miss Rowland, who organised the event, was delighted with its success. She said, “All pupils looked fantastic and it was a great day for celebrating a love of reading and literature.” 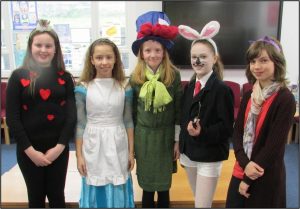 As promised, staff and pupils competed in their respective categories for the best costume prize. Mary Poppins, Professor McGonagall and Where’s Wally were pipped to the post by Professor Umbridge (otherwise known as Miss Bayjou). The pupil choice was tough, but the overall winner was eventually Dobby the Elf, or as her friends call her, Grace Sims. Both winners received a book voucher for their efforts.

As well as costume frivolity, pupils also heard the famous ‘Lamb to the Slaughter’ short story by Roald Dahl, read to them in 6 sessions throughout the day. The pupils became hooked on the story, and by period 6 were begging to hear the ending before settling to anything else!

Overall, the day (albeit a little delayed), allowed the school to continue to ignite a passion for reading amongst staff and pupils and brought some much needed joy after the previous week’s Narnia-esque weather