Posted at 07:51h in School News by mrskleink

Further news from March can be found in the March newsletter at the following link: https://www.strichardscc.com/parents/newsletters/

The geographers at St Richard’s explored the world with Google Expedition on Wednesday, 22nd March. Pupils had the opportunity to wear virtual reality headsets and explore a whole range of locations around the world. Pupils were heading high into the canopy of the rainforest, diving deep into the coral reefs as well heading up to the summits of volcanoes. They explored the consequences of an earthquake and saw first hand the devastation to the environment and how people coped with such a natural disaster. One highlight was flying high and coming face-to-face with Christ the Redeemer in Rio de Janeiro, Brazil. 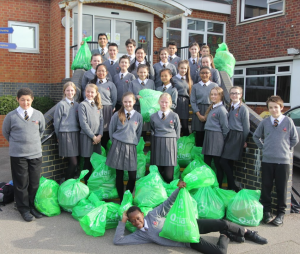 Year 8 pupils collected 25 bags of goods for Oxfam. This was an excellent effort and much appreciated by the staff at Oxfam.

On Wednesday, 29th March despite the drizzling rain, about 50 pupils with staff set of on our annual CAFOD sponsored Walk and Foodbank appeal. Every Lent we as a school endeavour to make it part of our Lenten preparations to help those less fortunate than us. Year 7 pupil, Maisie Nevey said, “I did the walk because I thought it would be a good way to give back during Lent to those who are not as lucky as me.”

We support every year, with our mufti day and sponsored walk money, the lifesaving work of CAFOD and their Lenten Appeal. This year it supports small fish farmers, who can in turn educate and help others in their community to become self-sufficient. This year we have also decided to support CAFOD’s East Africa Appeal to provide emergency support to those suffering as a result of famine in the region. Another pupil, Niall Scott-Mcwall said, “This was really hard but made me realise what people in Africa have to suffer.” 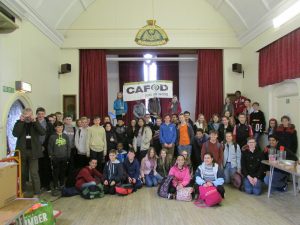 However, to ensure we support both home and abroad we also do a food collection for the Bexhill Foodbank. Pupils from the across the school bring in an item of food along with their donation for Mufti day. Our intrepid walkers then carry in bags the food on our walk and deliver it to the food bank at St Mary Magdalene’s Church Hall. In this way we are enduring some hardship to help us understand the hardship faced by many across the world and at home.

Our local Foodbank in Bexhill are always in need of donations as they serve so many and many in our school know of someone who has benefited from their support. Ronaldinho Chikoto in Year 7 said, “The walk was very tiring, especially carrying the bags, but it nothing like the hardship of those who need the food or those in Africa who have to face famine so I’m glad I did it.” 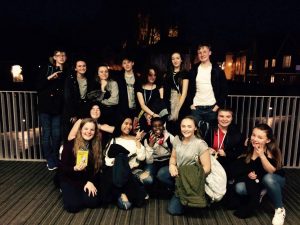 The Year 10 GCSE drama pupils at St Richard’s took to the stage on Friday, 24th March to perform as part of The National Theatre’s ‘Connections’ festival at the famous Marlowe Theatre in Canterbury, and had an experience “they will never forget.”

This prestigious youth theatre event gives young performers the opportunity to debut new-writing in a professional context, and works with theatres up and down the country. Their experience included an intense rehearsal process working with a National Theatre director; design; marketing; and stage management all culminating in a day at The Marlowe working closely with the theatre staff to produce their final performance on Friday, 24th March.

The play ‘Three’ by Harriet Braun explores the complexities of teenage relationships through the use of additional characters acting as ‘inner voices.’ The group chose the play as they felt it was an honest and funny ‘coming of age’ tale and they could empathise with the characters struggle to say and do the right thing, even when the voice in their head tells them otherwise.

Drama teacher, Mrs Dunster said, “I am so proud of what they have achieved and the progress they have made. They have become a strong, creative working team, and I know this experience has taught them a huge amount about professional theatre. Well done to all!”

Pupil, Kasey Cosens said, ”The NT connections festival was a fantastic experience and we have become a drama family. We worked really hard on the play, and the audience feedback was so positive. We hope we get to do more projects like this in the future.”

This is a great achievement for the more than 350 pupils who have represented St Richard’s since September in these competitions.