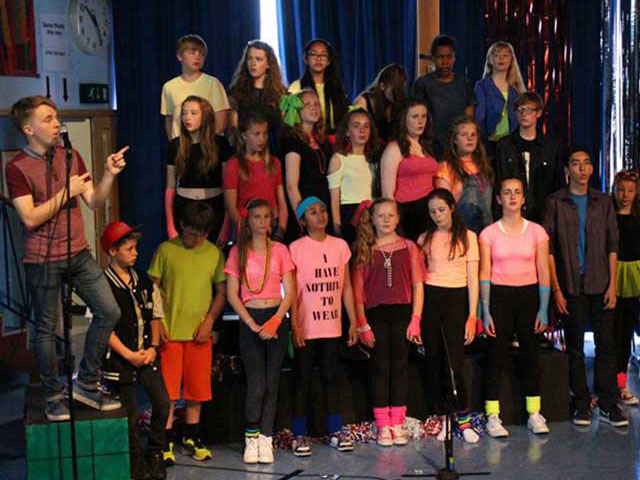 Posted at 12:00h in School News by Shaun Boughey

The summer term ended at St Richard’s Catholic College with a hugely successful production of ‘Back to the 80s’ (a musical by Neil Gooding, presented by arrangement with Josef Wineberger Limited). The cast performed for packed audiences three nights in a row and many in the audience were heard to comment that “the standard rivals the West End” and “I can’t believe this is a school production!”

This sterling show provided the opportunity for over 100 pupils to take part, not only taking on lead acting, singing and dancing roles, but also working on set design, lighting and sound technology. The show was excellently led and directed by the college’s outstanding performing arts department with special mention to the hard work of Rebecca Byrne, Rebecca Knight, Ian Fairbrass and Peter Roadknight. Many other staff and parents joined forces behind the scenes and on the nights in order to ensure all performances ran smoothly.

The audience loved the opportunity to relive the ‘80s with the show-stopping tunes – many were dancing in the aisles by the end of the performances! Aside from being great fun, this year’s show gave particular opportunity for pupils to shine in new roles and discover new talents. Alex Savvas, now in year 11, commented, “I auditioned for the show because some of my friends heard me sing and they really encouraged me to go for it. I was a little overwhelmed at first but overall it was an awesome, amazing experience.” He added, “I just wish I had the time in year 11 to be able to do it again!”

back to the 80s, events, news, pupils, st richards